Memories from a home in Søndervig 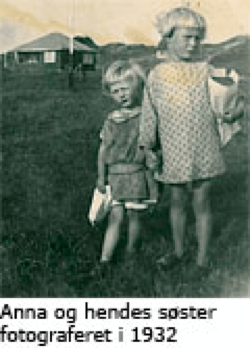 Anna Enevoldsen (born Kristensen) was born in 1927 on a farm south of Søndervig camping, as the second oldest out of four.

In 1954 Anna married Åge Enevoldsen, the mailman, with whom she had four children, two girls and two boys, of which one still lives in Søndervig, one in Rindum by Ringkøbing and two in Kloster. Anna Enevoldsen was sendt out at 16 to earn her keep on a farm on Holmsland during WW2. Anna remembers having to pass two checkpoints every other Sunday on her free day when visiting her family. Until 1954 she earned her keep along with her sisters in her childhood home, in Ringkøbing, in Herning and in the capital having only a break when in school in ther capital. Anna tells that they were 187 girls and the first class after the war.

Anna Enevoldsen lives in a house in Søndervig today where she and her husband have lives since 1957. Anna has been a housewife all her life.

Anna Enevoldsen is from a time where the kettel was heated on the stove, clothes were handwashed and fires were lit in the fireplaces. She remebers there being only 7-8 holiday homes around her childhood home.At that time only the first class owned a holiday home- the doctor, the dentist and the sergent remembers Anna. This however did not stop the holidayhouse children from playing with the local children despite class difference remembers Anna.At an age of 80, Anna Enevoldsen still has contact with the preceeders of a holiday home close to her childhood home.

Anna Enevoldsens husband, Åge Enevoldsen, worked as the local postman until 1985 which gave Anna the nickname ”Anna Post”. She remembers that before all the holiday homes were numbered they all had their own little name and this ment that the local postman had to have local knowlege of all the houses, their names and their location to sucsessfully deliver all the post.

The first difference Anna noticed on her return to Søndervig in 1954 was not the growing amount of tourists in the town but the fact that everybody now had electricity and running water, a thing we today take for granted, but in those days it greatly eased the load of a housewife with the washing etc. Today the water pump stands in Annas garden as a dear old memory.

Up through the 70’s the danes really learned the meaning of welfare and this rubbed off on the number of holiday homes and the local trade in Søndervig, which exploded. At that time the Dunes hotel was still running and Anna remembers celebrating her 25 year anniversary with her husband there, in 1979.

On questioning Anna about Søndervig today counter the past she quickly says she would not go back. She feels that Søndervig has develpoed and now is a beautiful town with a lot more to offer.