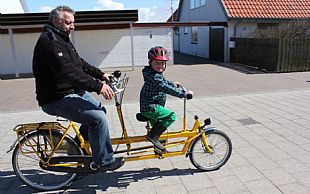 The bike lane between Ringkøbing and Søndervig is unique in itself due to the fact that it was the first lane in Denmark to have its own markings and not be in connection to a main road.

Already in the Spring of 1918 the discusion came up in the tourist society, about laying a 9 kilometer long bike and walking lane from Ringkøbing to Søndervig.

In the begining of this century, Denmark was the country where the bike was most popular. In 1892 Ringkøbing witnessed a woman come speeding trough the town on a bicycle. That same year was the first time a bicycle race was held by Aarhus bicycle club, from Aarhus, through Silkeborg and ending in Ringkøbing. The bike was still a rare sight. In 1895 a guest in the Søndervig hotel signed the register “J.P Laursen- cyclist.”

At the time it was estimated that the bicycle lane could be lain for 1,000 danish kroner but the finishing price was 37,000! Only a samll fraction of the workforce was paid.

So, a handfuld of people were chosen to arrange collections and raffels to raise money for the bike lane and in the summer of 1922 the lane was finally ready for use.

It was a big problem finding money to keep the lane up to date and repaired so toll was charged at each end of the lane from the people who cycled on it.

Laust as he was known, was born in Holmsland and owned a farm- Bøndergård, but sold this in 1920 and moved to Ringkøbing. He cycled to work evey day (with no days free). Otto Schelin from Ringkøbing wrote to the local magazine that he to this day can remember the smell from the time he started taking that bike journey in the 1930’s. He remembers paying 15 øre toll and the excitement of whether the toll collecter was there or not, because was he not there, then there was more money for ice-cream and soda.

The bicycle lane was frequently damaged by wind and weather, by the farmers heavy machinery and during the second world war. Money was hard to find for repaires and pressure was lain on Holsland to take over the duty of keeping the lane up to date. This happened in 1976, after 5 years trial period, and this now meant it was a public bike lane. In 2007 due to changes the bike lane was again taken over by Ringkøbing-Skjern.