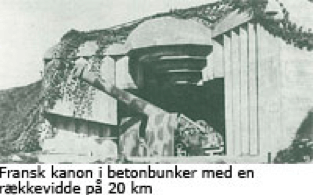 Occupation in the Søndervig-Houvig-Lodbjerg Hede area.

161 locals lived in Søndervig when WW2 started. They could see first hand the German troops occupying the bunkers placed along the coast, which can still be seen today. They were nearly all buildt on the dunes but now lye on the beach or in the sea, which is proof of the seas eroding of the mainland.

German troops reached Søndervig already on the afternoon of April 9th, 1940 and telegraph cables to England were shut down.out of fear of invasion, the west coast of Denmark became an important strategic place for the Germans during WW2. They decided in December 1941 to secure themselves from attempt of attack and buildt the “Atlantbank” from the North to the Spanish border in the south. On the west coast of Denamrk the fort building really took off after the fall of Stalingrad in January 1943.

One of the German headpoints was in Kryle in Houvig. Now more than 60 years later it is still possible to see the huge cement blocks in a few hundred meter radius.

The artillary and Luftwaffe lay close to kryle and the whole area was covered in bunkers, barbwire and minefields.

During the war, fierce airraids and the last plane was shot down south of kryle, into the sea the 20. April 1945- hitlers last birthday.

Through the decades it was believed that Denmarks smallest churches were built by Kryle, a protestant and a catholic church. Two small semidetached churches each 3x 10 meters. It has later been prøven that the rooms were not used as churches but as storage for potatoes. To this day, crosses and crucifixes are still lain in the two rooms in the belief that they once were holy churches.

The commanders room in the largest bunker stood out by the red strip of paint on the ceiling. This was used as a cinema after the war.

South of Kryle lay the installations ofr the luftwaffe, called “Ringelnatter”. Watch and radar towers were designed to detect aircrafts 100’s of kilometers away, and to lead the German soldiers towards the allying aircrafts.

Surrender on May 5th, 1945 in the morning took place in the head bunker.

It was agreed that the surrender would be peaceful and this agreement was held thankfully, as there could well have been a vicious battle between the 1000-2000 german soldiers with their arms, and 500 danish freedomfighters unarmed.

During the war a danish worker lost both legs in a minefield accident. Likewise, after the war, two boys were killed running in a minefield which had not yet been cleared.

Germans as well as Danes had been commanded to clear the minefields they themselves had lain. During this clearing on Lodbjerg hede 7 German soldiers lost their lives when one of the seven called out to the other six to talk to them and they were all blown to pieces. In total, 33 men lost their lives in minefield accidents after the war.

Already few days after the surrounder, the refugees started to arrive in Denmark. Some 500 refugees were stationed in Kryle and this was not a good thing for the Danish government, who had to take care of accomodation at supplies for all these people.

During 1946-47 all the german refugees were sendt back to Germany, thereby declaring the German chapter in holmsland history over.